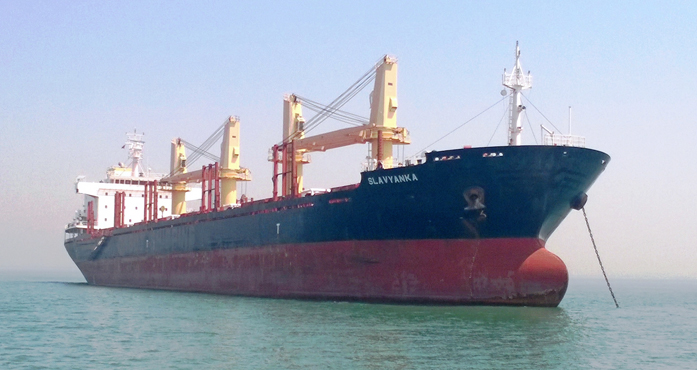 The m/v Slavyanka (ex CABOT AVIVA – ІМО 9496276) transfer of flag ceremony was held on May 11, 2016 in Qingdao, China. The first captain of the ship is Victor Stanev and the first chief engineer – Dimitar Ganchev.

The ship was built in June 2012 at the Nantong Mingde Heavy Industry, China. The length of the ship is 179.9 m, breadth – 28.40 m, and capacity (Summer DWT) – 32252 tons. The main engine (MAN B&W STX – made in South Korea under to a MAN B&W license) output of 6480 kW allows the vessel to sail at above 14 knots. The vessel is equipped with Hyundai HiMSEN diesel generators, made in South Korea. The vessel has 5 cargo holds with total capacity of 43447 m³ and is geared with 4 cranes with maximum lifting capacity of 30,5 t each.The Classification Society is Bureau Veritas and the flag state is Malta.

It is reminded that on 21 October 2015 Navigation Maritime Bulgare acquired the bulk carrier Koznitza (ex TESORO; IMO 9575436) two days later followed by m/v Kamenitza – another bulk carrier (ex REGINA; IMO 9575527). The vessels are sisterships and are the same type like Slavyanka. On 8 March 2016 at the Chinese Shipbuilding Yards Jiangsu Hongqiang Marine Heavy Industry, Qidong a ceremony was held for the launching of the vessel under hull number HQ 135 ordered by Navigation Maritime Bulgare. The new built vessel will be named Ruen and is the first ship from a series of six modern bulk carriers in which the Company has invested more than 150 mln dollars.

The newly acquired m/v Slavyanka is the third in Navibulgar’s history with that name.

The first Bulgarian sea-going merchant ship named “Slavyanka”
On 5-th May, 1964, Captain George Gardev and Chief Engineer Todor Kozhukharov took delivery on behalf of DTP “Texim” of the orecarrier “Andromeda” (later in the fleet of Navigation Maritime Bulgare the ship was sailing under the name “Slavyanka”). The ship had capacity 11017 tons and was built in 1945 in New Orleans, USA (Liberty class). She was sold by NMB on March 21, 1978.

The second Bulgarian sea-going merchant ship named “Slavyanka”
On June 17, 1978 Varna Shipyard launched the 24574-ton bulkcarrier intended for Navigation Maritime Bulgare. The ship was given the name “Slavyanka” (IMO: 9132519). The first captain of the ship was Mincho Minev and the first chief engineer – Petko Petkov. The second m/v Slavyanka was sold by NMB on March 25, 2011.